During our various road trips–Librotraficantes, Interviews of Rudolfo Anaya, Paul Hutton and Rudy Anaya again–Jesus Treviño and I discussed the music of Hamilton, the joys of writing, the glories of the southwestern landscape, health, making music, and sundry topics like dreams and druthers.

Treviño had an idea, a dream, to create a stage play from his wondrous stories. The author’s three collections include The Fabulous Sinkhole (1995), The Skyscraper That Flew (2005), and the American Book Award-winning Return to Arroyo Grande (2010). The latter title holds a special place in my heart; Casa Sedano hosted the launch reading in a backyard floricanto. 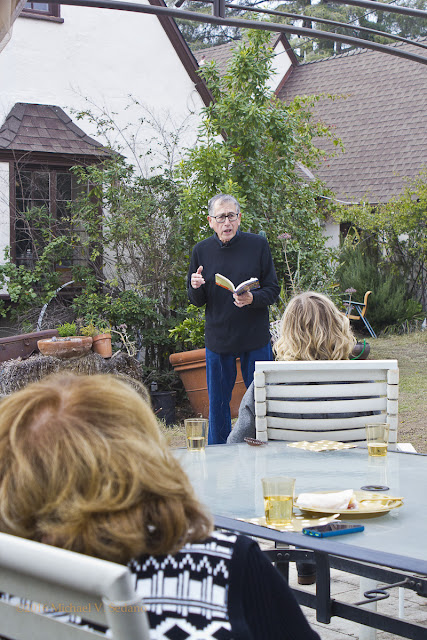 Converting narrative to dialog, Jesus Treviño told me a while back, is the toughest writing job he’s ever done. I commiserated unconcernedly, knowing he would overcome the task and produce a wondrous script. I was right. 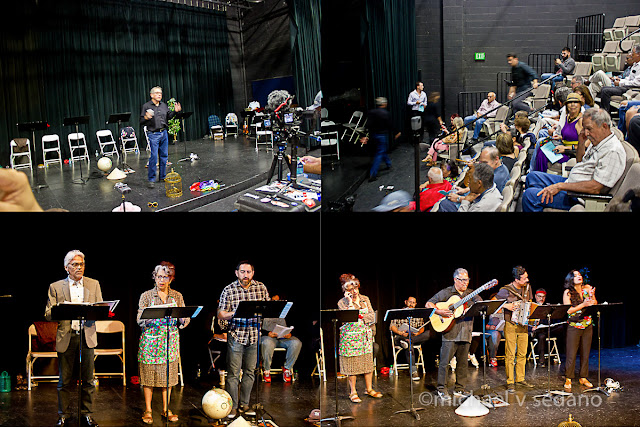 Plaza de la Raza–not the same place as la Placita’s LA Plaza de Cultura y Artes–was the ideal setting for the reading, not solely for its location in the heart of raza el lay. The Margo Albert Theatre is a 99-seat house. This means Screen Actors Guild members are able to perform there without the strictures of union scales.
No one was checking IDs, but I imagine all the cast are card-carrying SAG members. They include, José Delgado, Rose Portillo, Joe Hernández-Kilski, Sal López, Elisa Bocanegra, Daniel Valdez, Rosalie Rodriguez, Yeniffer Behrens (an eleventh hour addition to the fabulous cast), Mauricio Mondoza, Nicolás Valdez.

The three-acter features three key stories: the sinkhole’s origin, the mariachi playing to the empty bar that fills with los grandes, and the miracle of the cross. If you don’t know those plot lines, ni modo. Get yourself the books and enjoy them. It won’t be long before the next iteration of the script comes alive, and undoubtedly there’ll be a main stage production.

The Mariachi story is my favorite of the Treviño stories, though there are lots of close-second favorites. Poignant and heart-warming, the mariachi plot offers a music lover’s tribute to the greats of Mexican song and a commentary on change filled with magic. Reading it gives me chills.

It’s also one of the highlights of the thoroughly enjoyable performance. Three musicians, Daniel Valdez, Nicolás Valdez, and Rosalie Rodriguez, do a concert for Mrs. Romero, the sinkhole owner. Rodriguez’ Grammy-wining voice filled the house and the virtuoso guitar and accordion accompaniment had more than one person clamoring silently for “otra!” After the performance, Treviño told me that his production designer has a great idea, do a musical.

I totally endorse the concept. Not to the exclusion of the three-acts now in progress. Maybe because the songs Treviño includes are some of my favorites. “Amorcito corazon, yo tengo tentacion, de un beso….” sent me back to the 1950s when I made up my own lyric, “yo tengo tentación de un beso, con chile con queso…” Or maybe that was my Dad’s gloss on it. Then the trio sang La Adelita. I was lost deep in reverie for a long time there. 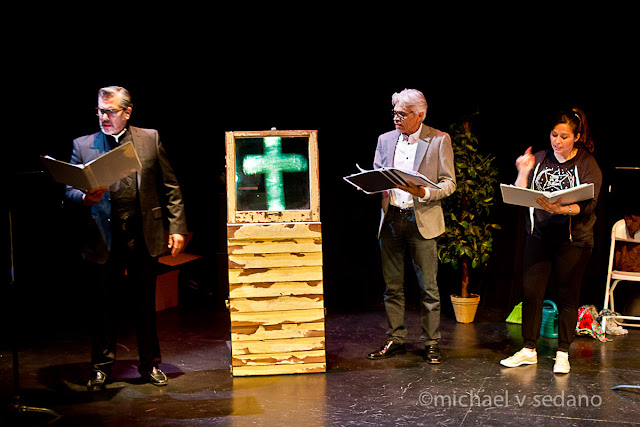 The miracle story unnerves people. In a setting dominated by absurdity and magic, Treviño hits us right between the eyes with a gut punch, killing an 8-year old boy and introducing a couple of asshole gang bangers. And guns. Maybe it’s just me, I get nervous in the ominous presence of lethal weapons. But then, asshole gangbangers love their cohetes, and the play’s the thing whereby to capture the conscience of an audience and make us uneasy.

The tragedy of Mrs. Romero, ay, talk about uneasy. Rose Portillo shows powerfully dynamic acting range because of that baby’s killing. Everyone laughs at the early Mrs. Romero, colorfully cussing those cabrones this and these cabrones that, all smiles and laughter. Then Mrs. Romero turns murderous and the house deadly silent, waiting to exhale.

Narrative ekes out a win here. That’s why this play is termed a work-in-progress. The connections between the sinkhole objects and the character development don’t jump out at audiences. While gente familiar with the books know what how why, and more, the script sacrifices the narrative conectas for stage business.  Friends I talked to, who hadn’t read the stories, didn’t get it.

Friends of the playwright added to the energy and enjoyment of the reading. As the unofficial official videographer of the movimiento, Treviño enjoys friendships with politicians, artists, photographers, teatro and film professionals (note that cast!), university officers, publishers, and at least one critic-photog.

Jesus Treviño’s three collections are Arte Público (link) titles that deserve attention. You had to be there at the right time to see the stories incarnated, but you can take a book everywhere, and who isn’t looking for some good “summer reads”? In a hurry to get those books? Phone 800-633-ARTE.

Copyright 2018 by Michael Sedano. All rights reserved and used in this guest blog with permission of the author.

The Life and Art of Marta Sanchez: Impressions of Chicana Culture, Tradition, and Memory In 1984 Marta Sanchez, a young Chicana artist from San Antonio, was selected for the “Mira” exhibit which was the first national Chicano/Latino art exhibition in America. Sponsored by Canadian Club, a beverage powerhouse in the United States and Canada, the […]